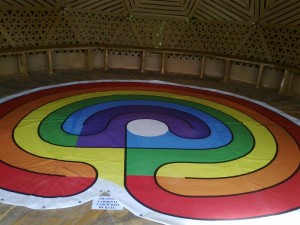 Richard Anderson, the author of books and labyrinth specialist, found that when walking the labyrinth, a person unknowingly passes through different states of consciousness and gets extraordinary experiences. Vital energy is being awakened, and it starts moving through the chakras. In this labyrinth, which has seven circles, energy moves in the following order: 3, 2, 1, 4, 7, 6, 5. Energy begins to move from the third to the second chakra, then – to the first; and then it jumps up into the heart (the fourth chakra), then to the top of the head, at the fontanelle (the seventh chakra), later – to the front of the pituitary gland of the forehead between the eyebrows (the sixth chakra), and from there it descends down into the throat (the fifth chakra).

Even if you do not experience any feelings or in general know nothing about energies, when walking the labyrinth energy will flow in the same order through your chakras and your body will experience spontaneous changes. If we draw lines according to the order in which the labyrinth is located, we will see the form of a cup which represents the Holy Grail of Eternal Life and its secret knowledge.